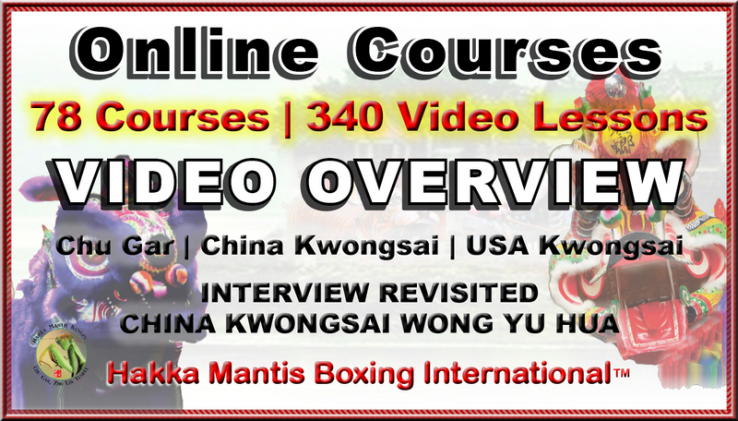 Watch the Video Overview Below

To understand Mantis today,
you have to search yesterday…

The following is an interview of Sifu Wong Yu Hua.  He is the son of the late Kwongsai Mantis Grandmaster Wong Yuk Gong and is considered the heir of Kwongsai Mantis in China.  I have received these questions from numerous people, in numerous countries, over a number of years, who requested this interview.   And so, in June 2005, I asked him:

RDH:  Can you tell us what is your relationship with Henry Poo Yee from the United States?
WYH:  I am not concerned with politics.  There is no head of mantis only heirs.  I don’t make any claims except to be my father’s son.  I do not know Henry Yee.  You know that Yee accompanied you (RDH) and Bill Chan once to Pingshan, about 1992, for a couple of days to visit me.  I have only met this person that one time, thirteen years ago or more, for a day or two. 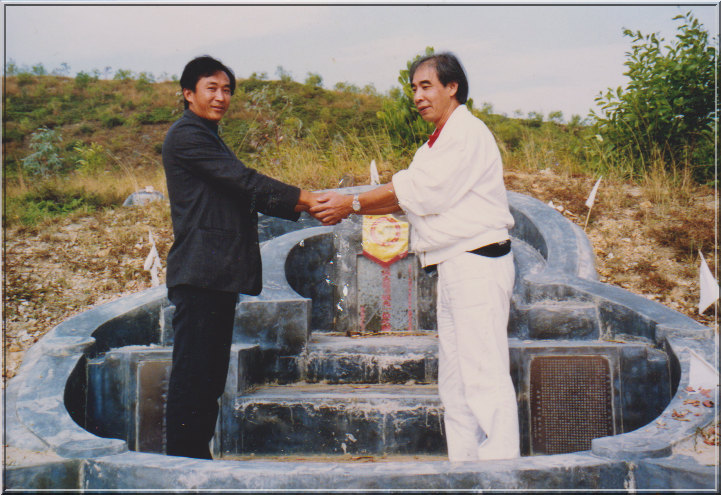 Circa 1992, RDH invites Henry Yee Poo and William Chan to Pingshan Town, Hometown of Kwongsai Hakka Mantis.  Yee pays respect at Wong Yuk Kong Ancestor’s tomb to Wong Yu Hua, son.  Bronze Couplets, on the tomb speak of Monk Som Dot and Hakka Mantis History.  This tomb was on the edge of a reservoir overlooking a large lake.  The tomb has been relocated some years ago to make way for a Shenzhen enviromental green belt.  Henry Yee passed in 2018.  RIP.

I heard in Hong Kong that Henry Yee has also stated that he is my good friend and in the past learned from my father, Wong Yuk Gong and my father’s Grand Teacher, Lee Siem Si.  None of this is true.  It is absolutely false.

I was also told that Henry Yee came to Hong Kong and stated among the Kungfu community, that he once came to see my father accompanied by Lam Sang.  None of this is true.  I have contacted the media, magazines and newspapers in Hong Kong not long ago to alert them about his erroneous statements.  I wish to publish an article to state the true facts.  Henry Yee is not my friend, I don’t know him, neither did he visit, ever see, especially, never learn from my father or my father’s Teachers.  One should not distort the facts for personal gain.

RDH:  What do you think about Henry Yee’s Mantis?
WYH:   From the very little I have seen and that he showed to me, it is definitely not the Kwongsai Mantis Heritage, I, my father, or my father’s Teachers have received.  There is no one in China who trains any of Som Dot’s branches the way Henry Yee does. 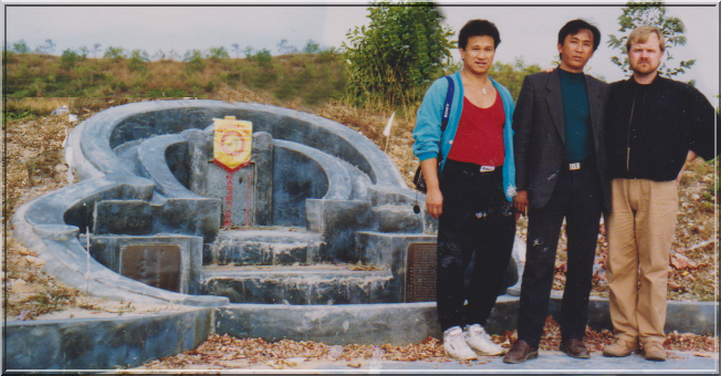 RDH:  Do you think Henry Yee is teaching Lam Sang’s Mantis?
WYH:   You know that it is difficult to translate Hakka to Mandarin, much more so, English.  Lam Sang’s students misinterpreted his Hakka dialect, perhaps.  “Som Bo Gin” means three steps; three scissors in China.  Thats all.  Lam Sang was a local.  You have heard many stories about him.  He studied Chu Gar Mantis and KwongSai Mantis. Lam Sang was a controversial figure.  But, Henry Yee’s Mantis does not conform to any standard in China. 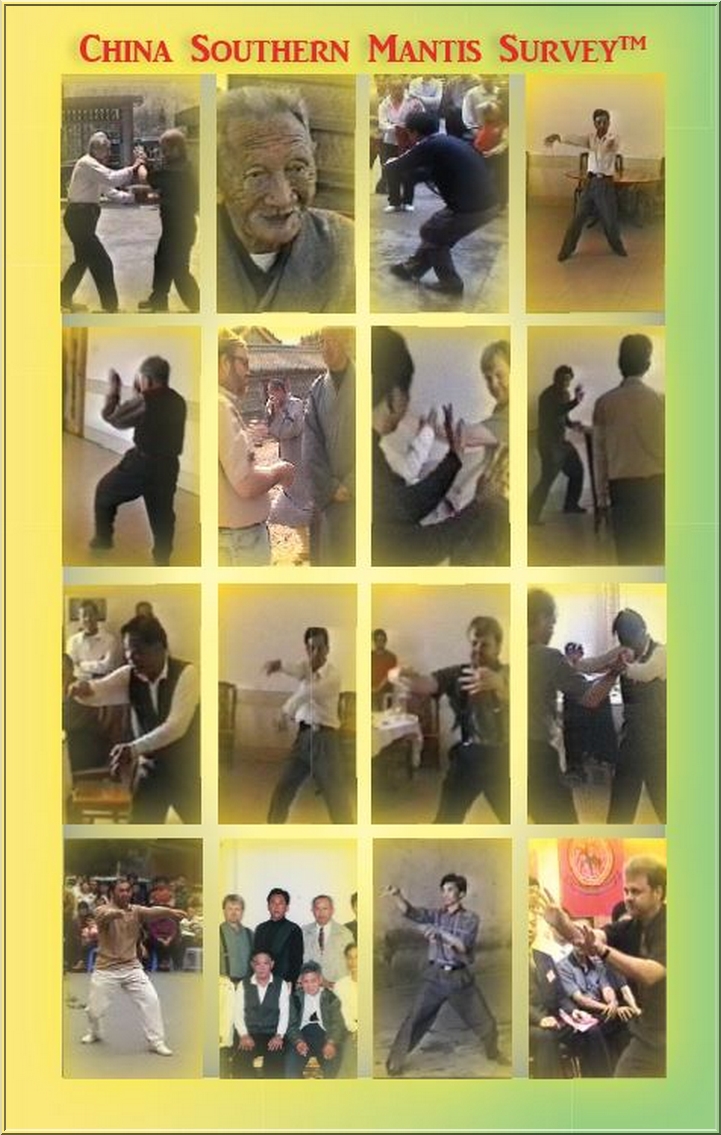 RDH:  Explain further please?
WYH:   Lee Ying Sing, as a student of Chung Yel Chong, stirred up trouble sometimes that he couldn’t extricate from himself.  Unable to get out of it, on occasion, my father had to bail Lee out.  Among other incidences (outside of mantis and not to be mentioned), he stirred up trouble with (the late) Wong Tam Gong, Chung Yel Chong’s well respected student in Hong Kong (refer to the 1962 Praying Mantis Fitness Society Celebration in the Survey).  That’s why he left for England. Chung Yel Chong’s students are still here and Wong Tam Gong’s students are still teaching in Hong Kong.   I am not one to speak ill.  These are the iron facts and should not be changed or distorted to suit one’s personal interest. [Lee Wing Sing and his son who carried Mantis, in the UK, are passed.  RIP.]

RDH:   Recently, there were 3 photos of your father posted on a website by Koo Kwai in Seattle, USA.  Do you know him?
WYH:   I don’t.  It is known that he was a student of my father.  You have at least one photo of him and my father, that I gave you several years ago.  However, his recent internet photos that I have seen, do not reflect the Mantis principle of “hands never rise above the eyebrows or fall below the knees.”

My father followed his teacher, Chung Yel Chong, for seventeen years.  He had numerous schools in China and Hong Kong and literally more than a thousand students.  I appeal to all Tanglang disciples to love and respect the history and blossom the art. These are the iron facts about Tanglang and shouldn’t be changed or made up to suit one’s self or purpose.

RDH:  These people that we’ve spoken of today, and others, outside of China,  say “Red Brow or Yellow Brow” was the founder of our Art in China.  What say you?
WYH:   You’ve been in China, north to south, for a long time.  Did you ever hear anyone in anyplace say so?  There is no such person.  This is a case of one person speaking erroneously, fictiously and everyone else then repeating it. 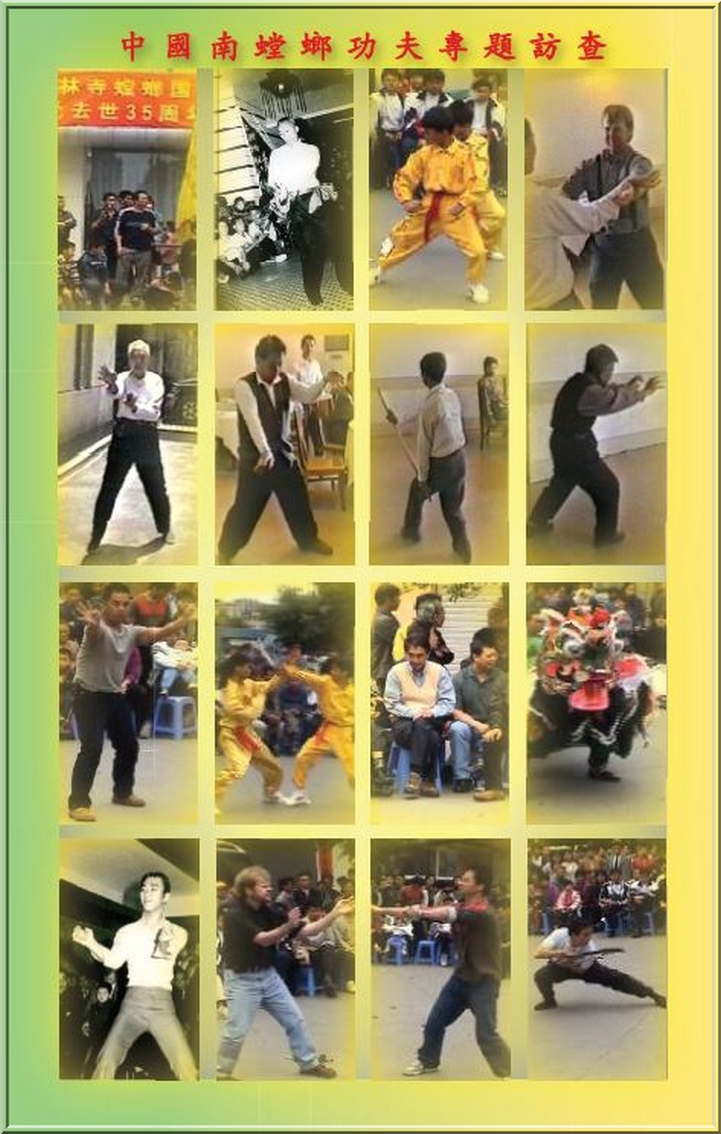 RDH:  Can you sum it up in a few words?
WYH:  It is like this:
TUN – Float (the body)
TO – Spit (the body)
TU – Spring Power
YAO – Soft Power
JIAN – Cut like scissors
The hands never go above the eyebrows;
Never fall below the knees.

Certainly this is not all, only a summation. 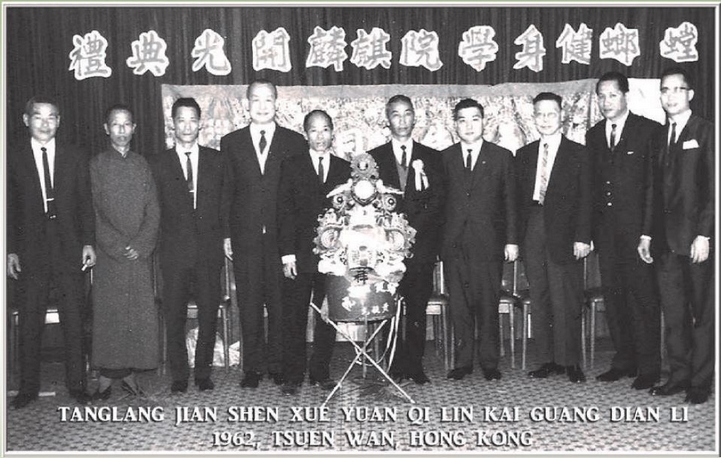 Centered left of the ‘Unicorn’ and in VIP position is Kwongsai Jook Lum Master, Wong Yuk Kong (badge on lapel).  Wong opened Five Mantis Schools simultaneously, in the 1960s Hong Kong.  To his left is Chu Kwong Hua (Lao Sui’s inheritor), friends Lok and You (Bok Mei Pai) and a local government official.  To his right is Wang Tam Gong (Chung Yel Chong’s Student), Chu Kwong Fang (Chu Kwong Hua’s Brother), Chen Kong Hai, Yip Sui (in Chinese dress) and Liu Kwok Dong (Iron Ox Pai).  The photo truly speaks a thousand words.  One of the notable Hakka Mantis students, at that time, was  Yeung Yan.  After learning mantis from my father early on he went to teach Mantis, in England.  His teaching was standard and his student’s today still retain the Kwongsai Mantis’ root and art, in the UK, although they keep private.

RDH:  When did your father go to Malaysia?
WYH:   At age 19, my father went to Malaysia, along with other local people.  Times were difficult and they all sought food and work.  He found labor on a ‘junk’, a Chinese boat.  There were many Kungfu men working on the boats in Malaysia, predominantly Chinese, too.

When the daily work was done, everyone always drank wine and ate together, on the boats.  One night, there were too many men, on the boat, and one person took exception to my father, fearing that he might lose his job to my father’s efforts. So, that person, soon, sought a priest to place an incantation, a spell, upon my father.

Later, my father returned home, to China, and settled in Huidong.  But, it seems the spell, may have been of effect.  He climbed up five stories on the corner of a building.  His first wife’s account states that he truly looked like an insect, able to climb up walls five stories tall, at once.

It was said, that he was fearful of his teacher, Chung Yel Chong, who quickly went to a local temple and used his own incantations to speed Wong Yook Gong’s recovery.  Witnesses say that after Master Chung’s chants, three black worms, about three inches long, emerged from the crown of Wong Yook Gong’s (bai hui- hundred meeting points) head.  Afterwards, Wong Yook Gong returned to himself and continued his teachings to many many students.  My father’s first wife, at the time, attested that she saw the whole affair.

Everyone called my father, Wong Yook Gong, Uncle Rock, because his body could withstand punches and kicks without harm, due to his continual mantis training which strengthens the bones and hardens the sinews. 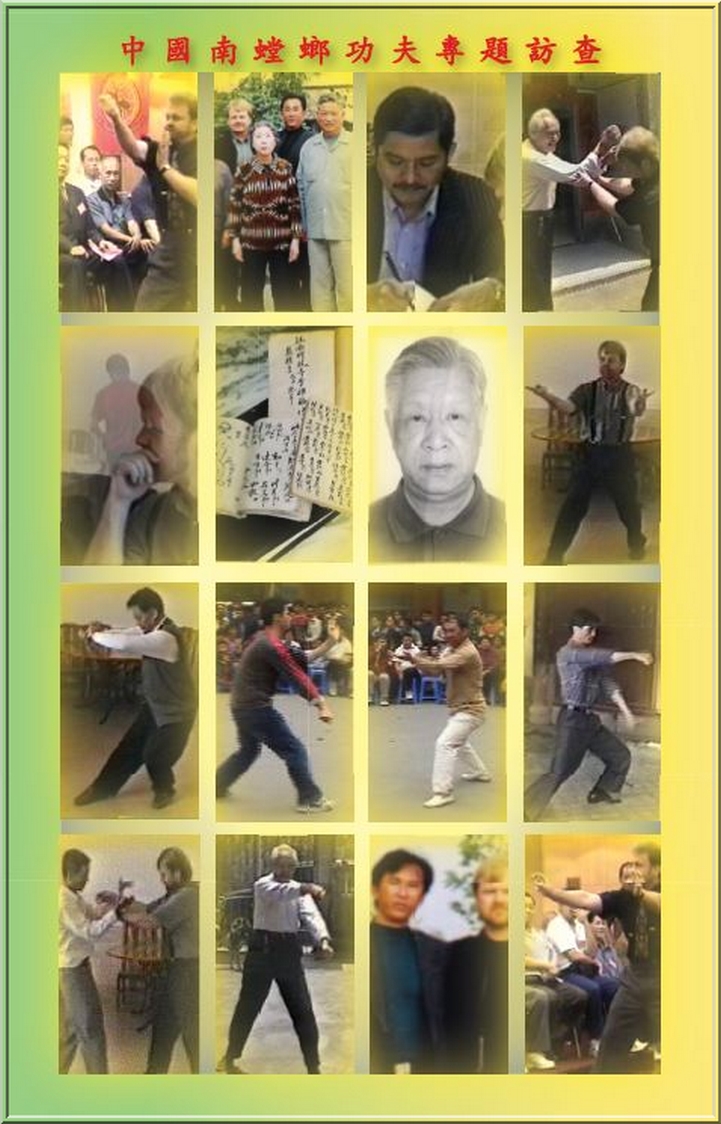 RDH:   How did your father meet his teacher, Chung Yel Chong?
WYH:   At an early age, Chung Yel Chong sought students at an opium den in Pingshan village.  Chung Wu Xing, who I introduced you to some years ago, was Chung’s Yel Chong’s first student.

Everyone also called Chung Wu Xing,    Iron Bok – Iron Uncle, for the same reason they did my father.  You interviewed Iron Uncle several years ago when he was in his mid 90’s.  He has passed on now.  He said students gave sacks of rice or staples to learn mantis instead of giving money, when there wasn’t any money to give.  The students in those very early years gave their whole-hearted interest, their soul.

RDH:  I appreciate that you (in the past and now) still look and care for those Kwongsai Mantis brothers, uncles, and your father’s friends, students and teachers.  What about your father’s introduction to Chung Yel Chong?  How did he become Chung Yel Chong’s student?
WYH:  At that time, in the 1920’s or so, in my uncle’s opium den, Cheng Yel Chong divided students into groups and secretly taught them Kwongsai Mantis.
One day, as a teenager, my father was caught by Chung Yel Chong, inside, practicing Mantis.  He had been secretly watching from the outside wall every day, and exercising himself.  Immediately, Master Chung caught my father, the young Wong, by the shoulder and asked, “Who is this boy”?

Afterwards, Master Chung took my father, as a young boy, to be his apprentice and for 17 years he followed Master Chung until his death. 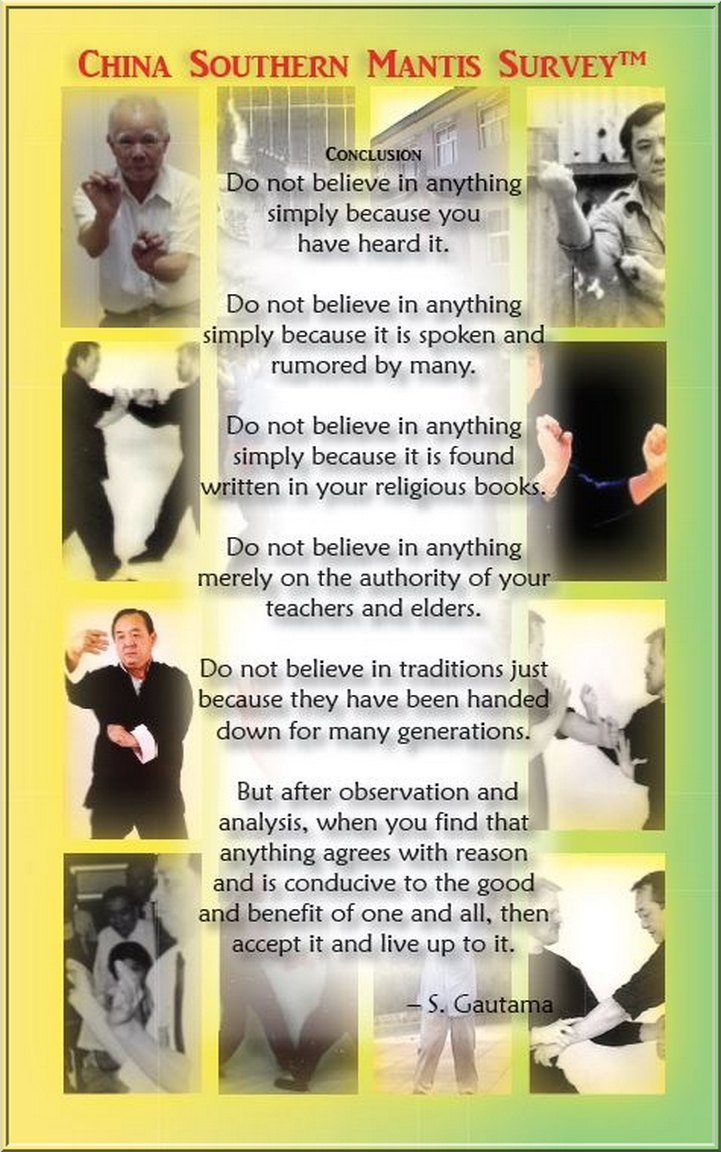 Thank you to the HMBI Members who recently contributed to Wong Yu Hua’s Interview, 2021 – he declined.  Currently, he is operating two Kwong Wu Tong locations, with Dit Da Clinics and Mantis-Unicorn Culture.   Wong Yu Hua remains, as I said, in my ‘Pingshan Mantis Celebration‘ Book, an example, of a gentleman Hakka Sifu.  He is a year younger than I (65) and sends his encouragement to Mantis onward, for the future, and consider new insights, in 2021.  Train new Courses.  Do not limit your understanding and ability.

TAKE 10% OFF ALL COURSES

GOOD IF YOU READ THIS FAR – CHECKOUT WITH CODE:  10off