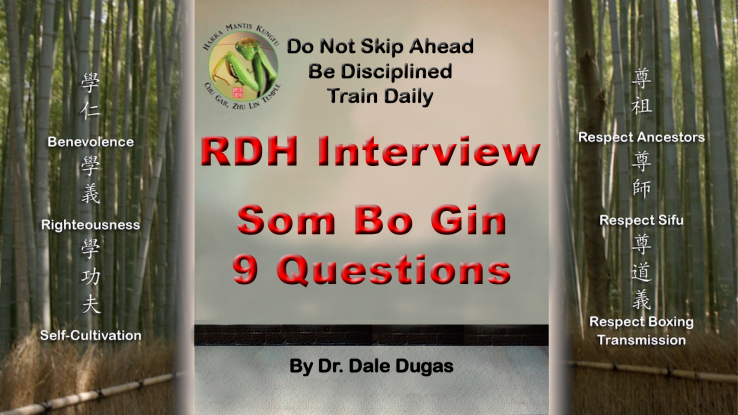 DD:  How do we incorporate Dip Gwat Gong into the opening of Som Bo Gin?

RDH:  Dip Guat Gong is the opening and closing of the rib cage and diaphragm combined with breathing.  This Gong is pulling the elbows backward and poking the chest out, at the same time.  Then pushing the elbows in front of the body and sinking the chest while raising the back and compressing the ribs.  Chu Gar has this in the SBG opening sequence.  In USA Kwongsai Mantis, it is found in the 10 Elbow Strokes.  In China Kwongsai, it is also incorporated into the Opening Sequence, beginning with Som Gin Yu Sao Form.

DD:  Which is better to train first in relation to SBG – Hard bridge or Soft Bridge?

RDH:  Life is like training – Yin and Yang – Death and Life – Hard and Soft – you cannot have one without the other.  To understand Hakka Mantis you must understand and train both Hard Bridge and Soft Bridge.  To understand Som Bo Gin you must train the Hard rigid crushing force and also the soft elastic spring power turning force.  It takes both to make one.  Soft overcomes hard.  Too hard and stiff and you cannot stick and follow the opponent’s force – too hard and stiff and you will be easily toppled over, uprooted.  Soft does not imply lack of force – Soft and turning in defense still requires force in attack.

DD:  What are Elephant Steps compared to Monkey Steps?

RDH:  Make sure to read and study my book Som Bo Gin Two Man Form.  Som Bo Gin is nothing mysterious.  You can say the distance of a cow lying down, fists fly with the speed of arrows, combat should begin and end within three steps and other similes, but the meaning is very simple; Som Bo Gin refers to three fronts of defense–up, down, and middle (shung-har-jung) and left, right, and center (zuo, you, qian).  Three steps forward with three fronts of defense.   The secret of Som Bo Gin is repetition of the forms, single and two man, uninterrupted over a long period of time.

DD:  Why is there no Som Bo Gin, in China Kwongsai Mantis?

RDH:  If you consider what I said above, that Som Bo Gin is three steps forward with three fronts of defense, then you can find many examples of Som Bo Gin, in China Kwongsai Mantis.  However, you are correct that there is no Form named such.  Shuang Zhuang (Double Bridge Buddha Hands) is China’s Kwongsai Som Bo Gin Form.  The body posture, horse, basic form structure is the same as both USA Kwongsai and Chu Gar.  However, the Iron Ox Three Door form is not the same as Kwongsai and Chu.  It does not include the double bridge steps and strikes forward, in the same manner.

DD:  What comparisons can we draw from the USA & CHINA Som Bo Gin Forms?

RDH:  Both USA and China Kwongsai Som Bo Gin include more skills than does the Chu Gar SBG Form.  The Chu Gar SBG Form is the most basic SBG Form teaching structure, stepping, and issuing power.  However, Kwongsai Mantis includes various boxing skills.  The basic outline of both USA and China Kwongsai is much the same – opening sequence – three steps forward – double knees – center, left, right and turn around – etc.  There is no question when you gain an understanding that Kwongsai, Chu, Ox all are from one root of Hakka Mantis boxing.  To gain a full understanding and ability you must study and train them all.  However, simply based solely on the boxing transmissions, we can see that Lam Sang’s teaching reflects the apex of Hakka Mantis – even in his Som Bo Gin single man Form – it is based on 3 x 3 = 9 – the Hakka Mantis numerology – the very practice of SBG Form is the union of heaven above and earth below.   But, let us not forget the practical result of 3 x 3 in SBG training!  Just train his 1st generation Som Bo Gin Form one time and anyone can experience for their self – it is better than pumping iron – it is live power – not dead weights.  I have not seen this principle of 9 incorporated into any other Branch or Clan of Som Bo Gin training.

DD:  Is Som Bo Gin the beginning and end of Mantis?

RDH:  Again, make sure to read and study my book Som Bo Gin Two Man Form.  Some say the beginning and the end of Southern Praying Mantis is the Som Bo Gin single man form. The meaning of this is the shadowboxing form embodies the principles and contains the fundamental skills which enable one to build a rock solid foundation.

In turn, the beginning and the end of the Som Bo Gin form is proper Mantis body posture and stance.  Correct horse stance is the father of power.  Mor Sao, the grinding hand, is the mother of Mantis hands.  Power is generated through the feet and up the legs and back, and expressed in the hands.  Without a firm stance there is no root and without a root there will be little power in the hands.  A common saying is, “When the stance is rooted one is as immovable as Mt. Tai.”

DD:  What is the best time to train Som Bo Gin?

RDH:  There is a story about Gin Foon Mark Sifu being the only 2nd generation Lam Sang disciple, with the discipline and diligence to get up every morning, at 4 am to train the Mantis and Qigong.  I know there were others in Lam’s generations that have done so too 🙂  The meaning of that anecdote is that according to Chinese notion, the Qi vital energy leaves the lungs at 4am and begins to circulate through out the body in 2 hour cycles.  So 4am is the best time to cultivate the Qi.  And it is a good time to train when still in the sleepy subconscious state.  Any time is better than not training and the only prohibition on training is usually stated to be 1-3 pm when the air outside is the thinnest and earth is just beginning its daily renewal of the atmosphere.  A second best time is often said to be 11 pm – 1 am.

DD:  What are the differences between USA 1st generation and 2nd gen Som Bo Gin?

RDH:  It’s good that you asked this.  I’m just about to release the USA Kwongsai 2nd Generation Som Bo Gin Course this month, November, if all goes well.  Keep in mind that Lam Sang taught the 1st Generation during the 1950s, at the NYC Hip Sing Association.  Those disciples mostly were mostly only teenagers and even Lam Sang was only in his 40s.

In the early 1960s Lam Sang was persuaded to move from Hip Sing Assn to the Hung Mun Association.  This was taboo to switch Associations and only one of his first generation disciples, Wong Bak Lim, moved to Hung Mun Assn with him.  There are many stories of Lam Sang’s teaching style that I have heard.  Most say he only liked to show a skill once and then he would sit down to read a newspaper and go to sleep.  Some say he peeked through the newspaper 🙂  When teaching two man skills, especially the two man long form, Lam would only show once and so the students devised a plan – one person would watch and remember the A side and another would watch and remember the B side.  So when Lam sat down with his newspaper to sleep they could put the A-B together and train the two man.

The difference in 1st and 2nd generation transmissions of Lam’s teaching are critical in the overall understanding of SBG.  The 1st Gen retains the Hakka mysticism practice of 3 x 3 built upon two lines of boxing.  The 2nd generation teaching has shortened that element but expanded into the issuance of the most ging powers (5 ging powers one action) and includes a third line of boxing (based on incorporating the China Dan Zhuang practice into Som Bo Gin).  Additionally, the 2nd generation teaching, in some ways, simplified the boxing skills included in Som Bo Gin, into trapping,  Hammer Fist and Palm strikes and exploding fingers that make for simple and effective self defense skills contained within the SBG fundamental framework.   And the 2nd generation stepping was simplified like the Chu Gar to a single right step instead of one movement three steps.  Ha ha ha – I’ve said a mouthful!  But that is only a short reflection now – the most important thing one can do is to train both 1st and 2nd generation Som Bo Gin and see for themselves – train both and you will internalize the differences and similarities and see for yourself the efficacy of Som Bo Gin.  Don’t limit yourself to one Branch or one Clan.  You cannot have a full understanding of Hakka Mantis, until you have gained an understanding and ability, of the Three Branches, One Root.

Train USA Kwongsai 1st Generation SBG now and watch this month when released and train 2nd Generation too.  And coming in December, before XMAS or early 2020, if all goes well, I will release Chu Gar Hard Bridge and Soft Bridge Som Bo Gin.  You can only gain a full understanding and ability by more training.