Follow the A, B, C, Video Instruction Below Step by Step

Repetition is the Key

Hakka Mantis trains in symbolism.  Repeat your movements using 3, 9, 18, 36, 72, 108 repetitions.  Repetition is the key to Form Training. The more repetitions the more understanding and ability you will acquire.  Train 108 repetitions of today’s sequence, if you like.

A common saying is, “after 1,000 repetitions, you are ready to begin training.”   Keeping a written daily log book of your training times and repetitions will help you keep on track and complete the Hakka Mantis Transmissions.

No Step, One Step, or Three Step Salute – Respect and Recognition 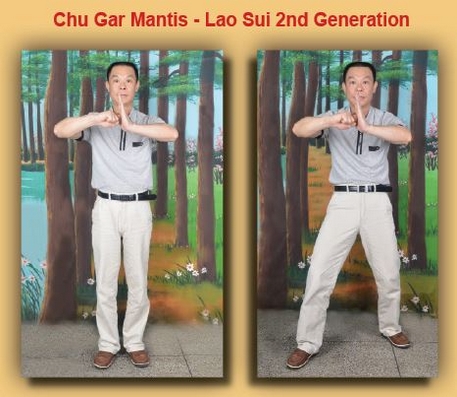 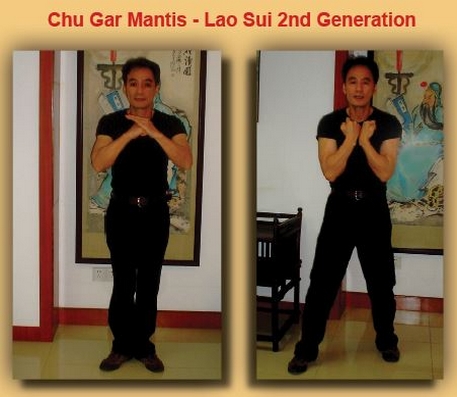 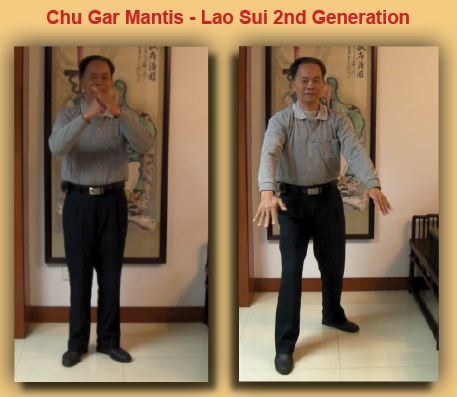 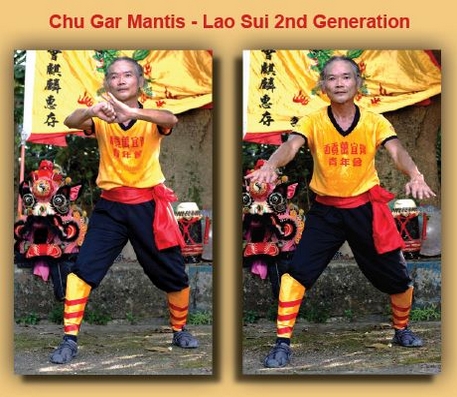 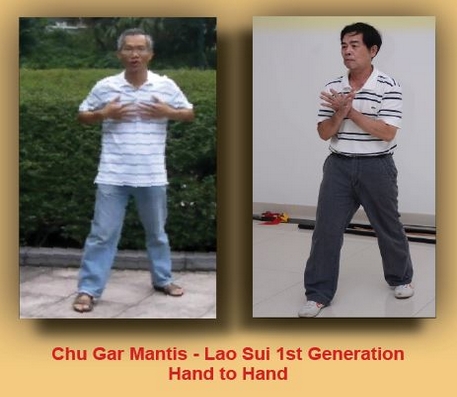 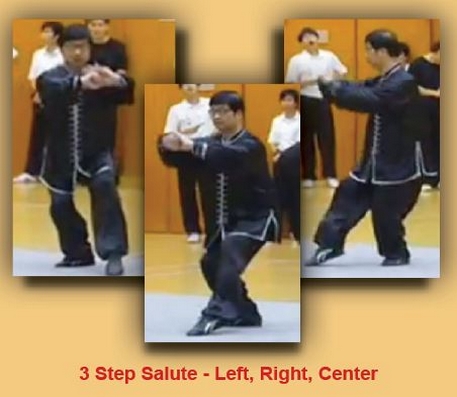 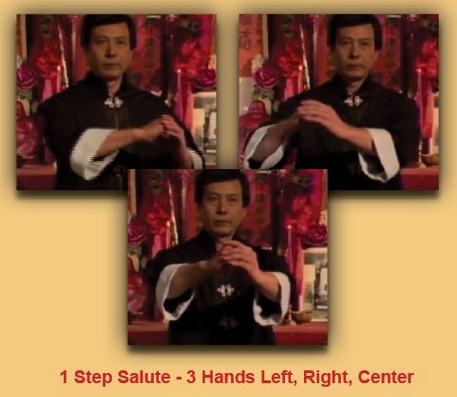 Some Clans begin with Salute and others do not

In Hakka Mantis, there are two primary aspects to the Salute: respect and recognition.  We can say the hand positions and steps indicate which Clan one represents.  In all cases, the Salute signals respect to Sifu first (who represents the Ancestral Shrine), One’s Pai (Clan or Group) next and is followed by a salute to the guests or audience, always in order of seniority.

In demonstration, one should first Salute Sifu, then his seniors, then guests or audience.  After demonstrating a form, the salute is reversed to guests, Clan members, and Sifu last. Traditionally, one would step back and away with the left foot after the final ending salute.

Today’s Hakka Mantis, in general, begins with a right Phoenix Eye Fist closed and left Palm covering.  There are some Clans in Hong Kong and China that perform this in reverse.  Some salute with the feet together others from a Mantis horse stance.  Salute may be performed with no step, one step or three steps.

Look for my Som Bo Gin Comparative Analysis course (and hardcover book) to further understand which Clans perform single man shadowboxing with which Salutes.  Some today skip a Salute and simply begin with an Opening Sequence.  But, in this Form, we will include the Three Step Salute.

Train ONLY the following skills on Day One

Now Follow the Video Instruction below of today’s training only

Don’t worry if you feel this is not enough today.  You will gain an understanding and ability upon completion of this Course.

You may train any of the three skills or the sequence of three skills, more than nine or eighteen times. Whichever skill you find difficult, then train it more, until it is natural.

Now follow me on the video and learn the Three Step Salute and Three Variations, of the Opening Sequence, of this Form.

You may experience a delay and buffering the first time videos are loaded.  Afterwards, the delay will disappear.  We use Amazon S3 / Cloudfront CDN, and other platforms, for the fastest worldwide delivery of Video content.  Play time is subject to your local PC settings and your local Internet Service Provider bandwidth and load.

A: Video Instruction - Day One - Step One

B:  Salute and Opening Sequence 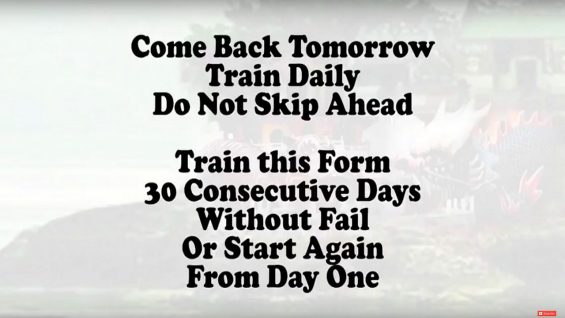 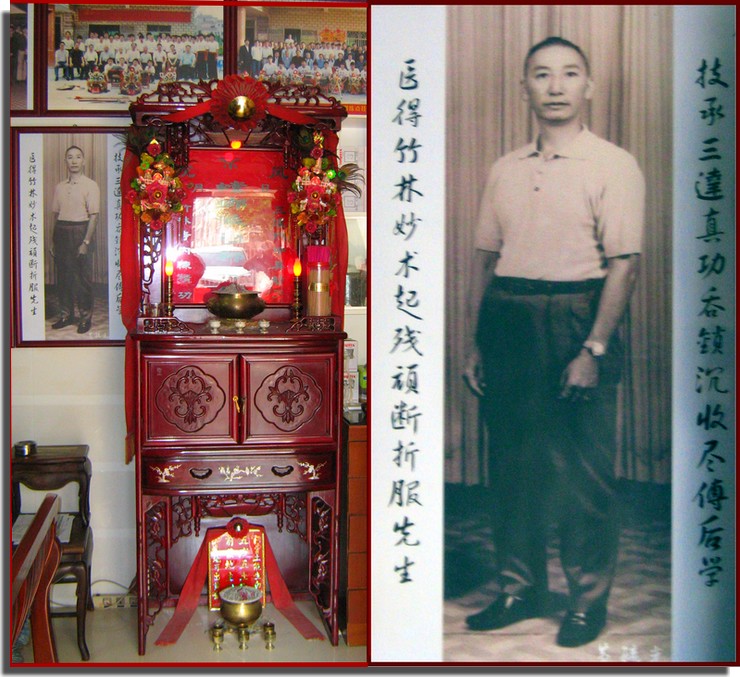 It was in the town of Pingshan, then truly a village, circa 1940’s, that Wong Yuk Kong opened his first school.  Master Wong Yuk Kong, learned from master Chung Yel Chong.  As a kungfu master, Wong was patient, with an interest to teach, hardworking, and had an unselfishness to teach all his knowledge.  Wong, as a teenager, met his master, Chung Yel Chong, beside the ‘East River’. Wong was impressed by Mr. Chung’s extraordinary kungfu and his good manner and so became his student.

In the first three years, he was taught only the basics, although, he still practiced hard every day.  His master, observing his sincerity, decided to teach him all the praying mantis kungfu, internal and external, soft and hard, and the medicine.

In another four years time, he was able to understand absolutely the main points of the body posture and breathing, as well as the staff and sword.

Since, he had attained a solid foundation, any kind of change did not bother him at all.  Afterwards, his teacher decided to give Mr. Wong his own school and asked him to fulfill his dream on the upper and lower streams of the East River.  He took many students and they were all treated the same, slow or fast, mind or ability.  Master
Wong tried his best to help them all to become a success.

He encouraged the higher level students not to look down on the younger brothers, even though they may have more training, and taught them the higher purpose of kungfu was for health and fitness and the continuation of Chinese culture.

As a martial art teacher, Master Wong encouraged his students to exchange with other “Pai” or other schools so they would be experienced in the exchange of techniques, and although, his kungfu was outstanding, he never seriously hurt anyone in order to win.  Other masters and “Pai” treated him like a brother-friend and he became famous because of his gentlemanly behavior.

Many people traveled from far distances to become Master Wong’s students and then taught in their own areas, as he was known to be goodhearted and open-minded!  Especially, in regards to his kungfu.

In fact, Master Wong never limited himself in learning.  He studied and practiced other people’s systems and was able to understand the advantages and disadvantages of other styles. Therefore, his teaching of Praying Mantis was the result of a broad understanding.

He invented the “Mui Fa” Plum Flower Fist.  And the “Chu Sa Cheung” in which he would concentrate all his power in one finger to attack.  All who had experienced his skill were impressed.

After moving to Hong Kong and opening several schools, Master Wong had truly taught more than one thousand students.  His friendly and easy going personality made everyone feel happy and comfortable.

Unfortunately, nature is always jealous of the outstanding one and Master Wong died at 52 years old.  Before he passed away, he asked all his students to his bedside where he repeated many times the important points of his system and medicine.

Now, the System is able to be carried on because of those who shared the spirit of master Wong, that is, “teach others all that he knew.” 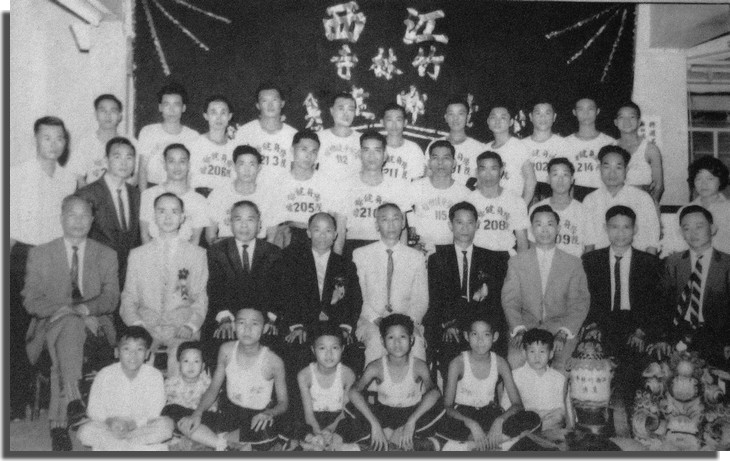 As with all ‘names’ of the individual skills, it is less important what you call them and more important that everyone is on the same page and understands the skill spoken about.

For example, “Bao Zhuang” and “Bao Zhang” are used interchangeably among various clans.  Zhuang meaning “stake or pole (something offering resistance)”, and Zhang meaning “palm.”  Bao means to “cover, guard, protect, shield, wrap around”.   Bao Zhuang or Bao Zhang both mean to cover and protect the centerline (with the forearms), while simultaneously attacking with the palms.

Also, remember, that when you speak of “Southern Mantis” you are usually speaking, in three dialects:  Hakka, (one or more) Cantonese (dialects), and sometimes Mandarin.  An example is “Chu Gar Pi Sao” – “USA Kwongsai Choc Sao” – “China Kwongsai Tan Sao”, all refer to the same hand – the middle gate to upper gate slicing back hook defense.  It is important to remember the names of each skill, but only so far, as the name aids your ability and training.  A Rose, by any other name, still is prickly!

Do As Instructed For Day One - Come Back Tomorrow

Click above and “Mark Complete” this lesson.  Come back tomorrow and continue Day Two training.  Every day you will add more skills step by step, until you can play this complete Dan Zhuang, Single Bridge, Buddha Hand Shadowboxing Form.

The worst question is the one that is never asked.   Leave your questions or comments below and we will reply with answers or feedback.  Welcome.

Use the Arrows - X- and Mark Complete

Use the Buttons AboveWhen you finish each day’s training click the “Mark Complete” button to update your Progress bar for the Course. Use the arrows < > to move forward or back through the Course's Daily Lessons. Use the X to click out of the current Lesson and back to the Course page.If you have clicked “Mark Complete” and progressed to the next Lesson, you can still go back to previous Lessons and “Mark Incomplete”. In this way, you can go back to spend more training time on previous lessons. Just don’t forget to “Mark Complete” each Lesson when you are satisfied with that Lesson’s progress. The Certificate of Completion, for this Course, is available when all Lessons are "Marked Complete".

Intent - Warrior SpiritThe first principle is intent or will-power. Intent is simply defined as 'warrior - spirit'. Without it there is no focus of the body and mind into one purpose. Strike with the soul, and you will never miss. Thought and action are one.Train your memory. Internalize your training.

In this Course: Line One

All Hakka Mantis is progressive teaching, step by step. This Dan Zhuang Form contains steps, hands, and sequences that you will build upon, in the following China Kwongsai Mantis Shadowboxing Forms. This Form should be the first China Kwongsai Mantis Form that you train.This Form is taught in Two Lines and a final turn around and closing sequence.Form training is to mold your shape into the Mantis body posture and footwork. Forms do not always translate into application. Some Form training is simply to mold your shape into the Mantis frame.

In this Course, you will train "Three Step Salute" stepping into a "right - left - right" back stance and salute with the right phoenix eye fist covered by the left palm. Some Clans reverse and / or alternate the Salute hands.

About the Opening Sequence

Do Not Skip Ahead

In a regular Hakka Mantis school, students are separated by training: Novice, Intermediate, Advanced. You are not allowed to skip ahead (or in olden days even look at seniors training).I could restrict access to your next days training in this program, but I trust you will follow the Course step by step and not skip any part so as to achieve optimum results in your training. Skipping any part or any program will result in a lesser understanding and ability.

Do As I Say

In all cases, do as I say, not as I do. You may also see guest Sifu or Archive footage that varies. Do as I say, in all cases, for optimal benefit... RDH

Have you viewed the complete transmissions of USA Kwongsai, China Kwongsai, and Chu Gar Mantis found on the 'Suggested Training' page?